A few weeks, ago, I stumbled upon a book entitled “How to Write a Novella in 24 Hours”. Of course, I was intrigued by that title and had to read it, thinking…if I could write a novella in 24 hours, I could write 4 books a month!

Of course, the first draft of such a work would probably require at least a week’s worth of revisions before heading off to an editor. But still…that’s a lot of writing!

Since then, I’ve heard from fellow authors Rhonda McKnight and Unoma Osiegbu-Nwankwor​ about the book’s content. Aside from making us laugh, the book has challenged us to  train ourselves to use our spare moments well. Ten minutes here and fifteen minutes there adds up to thousands of words in just a few days.

Then author Piper Huguley “piped up” (I couldn’t resist) and mentioned how she uses an old contraption called an  Alphasmart to type almost anywhere. I’d never heard of such a device until last week! Compared to the price of a laptop or a table, it’s very inexpensive ($30 or less). 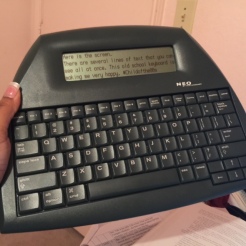 Basically, it’s an old-school keyboard with a little screen. You type, it saves automatically. When you get back to your computer, it uploads beautifully. The three best things: It’s portable (would fit in an oversized purse, runs on AA batteries that rarely need replacing), it’s a REAL keyboard (no tapping on a flat screen), and because it’s pretty ancient, it provides distraction-free writing (no internet, no pop-ups, it’s just you and the words, baby). Since they’re so old, you’ll have to get one on Ebay or an alternate seller on Amazon. (Be sure to get the Neo version.)

Finally, I told my writing group about my desire to write well in shorter periods of time, and they added me to their Facebook Messenger group so I could do “writing sprints” with them. Basically, either Jackie Castle, Patti Carroll, or Margi Laine will ask if anyone wants to do a round of writing. Each round is 30 minutes. Someone sets a timer, writes “Go” and we’re off. 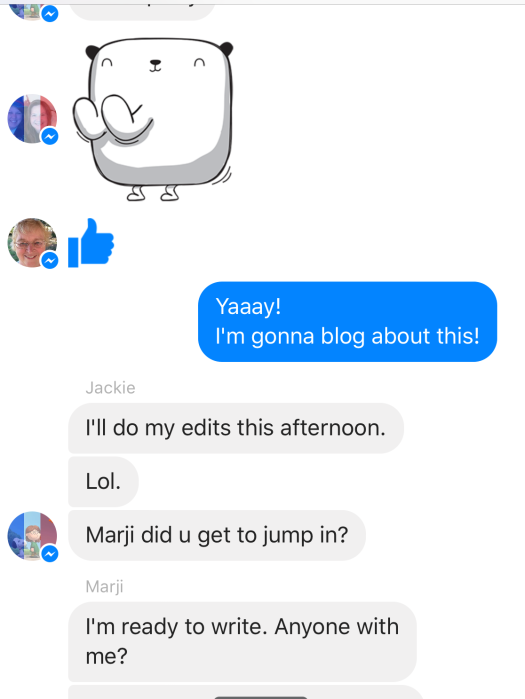 Half an hour later, the timekeeper sends a message to stop. We all put up our word counts and congratulate one another.

I got in 647 words this morning in the first round. Then I had a lunch meeting. When I got back, I did another round with Jackie and ended up with another 565 words. Normally, with a lunch meeting and all, I wouldn’t have even thought to write before heading out the door. Mind you, I didn’t get to comb my hair (I wore a hat), but still…I’ve got 1200 words in and don’t usually start creative writing until late afternoon/evening.

Anywho, just wanted to encourage those of you who are writing to keep up the good work and find ways to use your downtime (without robbing yourself of much-needed rest).

And for those of you on the other end of all this — the readers–we appreciate you and promise not to publish the first drafts of these quickly written works. We’re still gonna fix ’em up for you!

And speaking of such, Mama B #6 is almost ready for the readin’! If you haven’t pre-ordered, watchu waitin’ on? LOL! 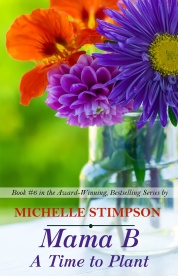